At the opening plenary session of the AQUA 2012 event, co-organised in Prague by the European and World Aquaculture Societies, Patrick Sorgeloos, Director of the Laboratory of Aquaculture and the Artemia Reference Center of the University of Ghent in Belgium, was presented with an Honorary Life Membership of EAS.

Honorary Life Membership is the highest EAS award and is given to those persons that have had a marked impact on the development of European aquaculture.  Since 1981, EAS has bestowed this award on only 10 persons, including such names as Eric Edwards, Bernard Chevassus-au-Louis, Peter Hjul, Colin Nash and more recently, Courtney Hough and Pascal Divanach. 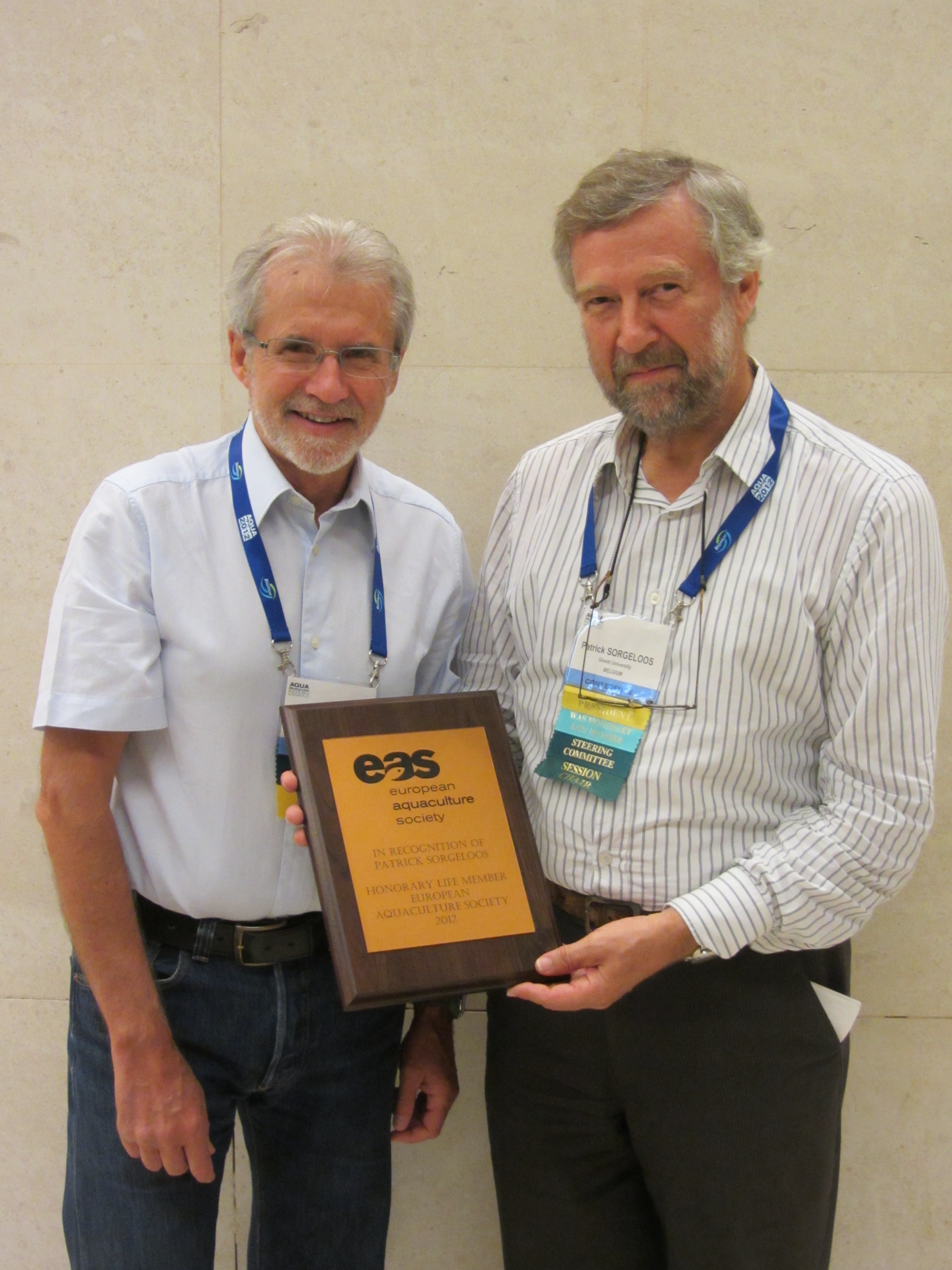 The award was presented by the EAS 2010-2012 President Yves Harache, but announced by 2008-2010 President Selina Stead, leaving the EAS Board of Directors after 12 years. Selina introduced the awardee as a household name in aquaculture – not only in Europe but across the whole planet – and hence one of the reasons why EAS wished to make this award at its global event, AQUA 2012, where he was also a member of the Steering Committee.

She described Patrick’s exceptional vision, when, at about the time of the founding of EAS in the 70s, he realised the potential of a small crustacean that would affect aquaculture production in Europe, but also throughout the world, on species that required special larval rearing strategies to break a severe bottleneck to their commercial production. He founded the Artemia Refence Center and the International Study on Artemia, so important for world aquaculture.  He created one of the global leaders in specialist aquaculture feeds and he is probably the world’s most travelled aquaculture expert, having been to just about every country on the planet where aquaculture is practiced.

He created the ‘standard’ for a Masters course in Aquaculture and for specialist training on Artemia. More recently, he pushed the main industry players to create the European Aquaculture Technology and Innovation Platform that has just completed its Vision and Strategic Research and Innovation Agenda, presented at AQUA 2012.

On calling Patrick to receive his award, Selina spoke of her pleasure and personal honour to make the presentation of Honorary Life Membership to him. This was echoed by Yves Harache as he presented an honorary plaque to Patrick.

For his part, Patrick dedicated the award to his beloved wife ‘Mama’ Magda and to her love, care and affection to the students, past and present, of the laboratory of aquaculture in Ghent.